It Doesn’t Feel Like Heaven Right Now for Employers

THE WAITING IS OVER NEW FLSA OVERTIME REGS EFFECTIVE JANUARY 2, 2020 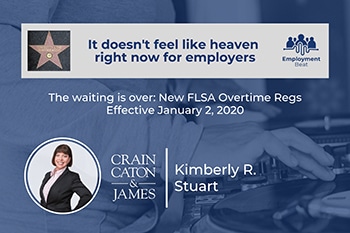 Three years after its initial release of final rulemaking that would have raised salary basis thresholds, making approximately 1.3 million employees, according to DOL, eligible for overtime.  DOL announced today that those rules will finally take effect on January 1, 2020.

Here is what you need to know:

Notably, the salary basis amounts for the new rules  are significantly lower than what would have been enforced under the May 2016 proposed rules.  Additionally, the new regulations do not provide for  automatic adjustments as would have the May 2016 rules.

The Department had issued final rules regarding FLSA on May 23, 2016.  The Eastern District of Texas declared the rules invalid, holding that DOL’s attempt to more than double the salary basis thresholds was not within DOL’s authority.  On appeal, DOL sought to abate the case to avoid being told exactly what its authority would be.   It is likely that review will be sought for the new proposed rules.  Again, the waiting will be the hardest part.

Because the increase in salary basis threshold is significantly lower than the 2016 proposed rules—about 1 ½% as opposed to more than double, it is likely that the Court will not invalidate the new rule.  The salary basis has not been changed since 2004.

Employers who did not do so in 2016 should audit their workforce to determine the number of currently exempt employees who will fall below the new salary thresholds.  If those employees work consistent overtime, Employers will need to conduct a business analysis to determine whether those salaries should be raised to the new thresholds or whether the employer can implement an Incentive program to meet the 10% of the standard salary level requirement.  Employers may need to consider work shifting or stricter enforcement of its overtime policies as an alternative.